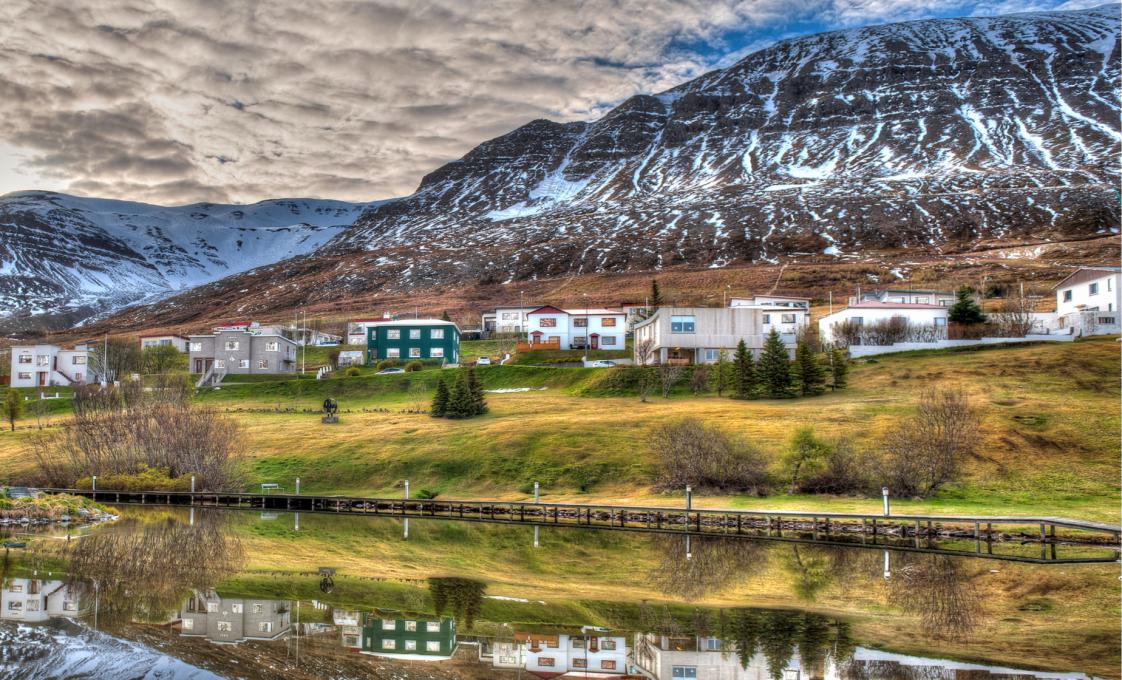 This private excursion from the port of Akureyri, will take you on a journey like no other to the remote Trollaskagi peninsula, where you will drive along the coastline, visit black sand beaches, charming fishing villages and end at the Kaldi Brewery.

The Trollaskagi peninsula located in northern Iceland between the fjords of Eyjafjordur and Skagafjordur. The peninsula is mountainous, with several peaks reaching over 1,000 meters (3,280 feet) above sea level, the tallest being Kerling. It is the part of Iceland with the highest elevation, outside the central highlands.

After meeting your local, friendly and knowledgeable representative at the pier, you will be escorted to your comfortable waiting transportation. Leave the port area and take a drive down the coast from Eyjafjordur to Siglufjordur, stopping to enjoy some time on the black sand beach at Olafsfjordur. This town is in the northeast of Iceland, located at the mouth of the fjord Eyjafjordur. This village is basically a fishing village today and like many towns and villages around the coastline in Iceland, the community came into existence at the end of the 19th century and developed mainly in the first half of the 20th century.

Travel next to Siglufjordur, a small fishing town in a narrow fjord with the same name, on the northern coast of Iceland. This historic fishing town gained fame and fortune as being linked to the ebb and flow of the fishing industry. A tiny shark fishing village in 1900, the town soon became one of the largest towns in Iceland and the undisputed capital of herring fishing in the Atlantic. The village is also home to the award-winning Herring era museum and recently the town was used in the series "Trapped".

Continue your day and stop at the villages of Hjalteyri and Dalvik. Hjalteyri is a very small fishing village on the western shores of Eyjafjordur where the buildings of the old herring factory are often used as a venue for art exhibitions during the summer months. In Dalvik, a seaside town located on the natural paradise of the Trollaskagi peninsula, discover a colorful and charming true fishing village. One of the many seaside towns in Iceland, the harbor in town is a large fishing and commercial port, including the departure point of Sæfari boat which serves the island of Grimsey.

You can round out this incredible day of sightseeing with a stop at Kaldi, Iceland's first microbrewery, where you can sample some of their fine brews. When the company was founded, Kaldi was producing 170,000 liters (over 26,000 gallons) per year, however, due to the demand they have added fermentation tanks and increased production in 700,000 liters (just under 185,000 gallons) per year. Today, many flavors are made including seasonal brews, like the red lager and chocolate porter for Christmas.

This private tour can be tailored as per your preference and you can also choose how long you want to stop at each place and always stop for photos along the route.

We are experts in providing exceptional shore excursions. We understand that in today's fast paced world, vacations have become an increasingly important way to relax, reconnect with family and friends, and experience new and interesting places. With this in mind, we provide the highest quality tours by performing extensive research, and detailed reviews. While other companies also offer excursions, we strongly believe our expertise and approach set us apart. The large cruise lines sell shore excursions - typically in very large groups visiting high traffic sites. We focus on smaller groups visiting more interesting and authentic locations using more personalized local operators. While the cruise lines are experts in delivering cruises, we are experts in delivering shore excursions.

Our Approach
We believe quality service is not only highly valued by customers, but ultimately leads to better experiences and higher satisfaction. Unlike the cruise lines and other tour companies that rely almost entirely on websites, we encourage customers to call us. We want to invest our time answering your questions, providing input, and selecting the excursions that best meet your needs.

Our Tours
Our goal is to provide customers a wide array of exciting, appealing, and enriching tours. For those customers who prefer to travel in smaller groups with more personalized service, we offer a wide variety of small group tours around the world. These tours generally range in size from 2-12 people compared to larger tours which can number up to 50 people. While exploring the destinations and ports on this website, feel free to search for these "Small Group Tours". For those customers interested in private tours, we offer many outstanding excursions that allow you to travel with your party alone and, in many cases, to fully customize your tour. Search for "Private Tours" if you are interested in this experience. Our "Scenic" tours provide up close and personal access to some of the most spectacular natural environments on Earth from majestic glaciers in Alaska to spectacular reefs in the Caribbean. Our "Cultural" tours allow customers to experience local customs, entertainment and culinary delights ranging from tribal dances in Alaska to an outstanding local meal in Santorini, Greece. Our "Active" tours offer a multitude of exciting and adventurous ways to experience our destinations. Our customers can kayak the turquoise waters of the Caribbean, hike to a spectacular waterfall in Hawaii, or bicycle through quaint villages in France. Our "City" tours allow travelers to see the highlights of great cities around the world with unique insights provided by our expert tour guides.

Our People
In our experience, exceptional travel experiences are almost always delivered by exceptional people. With that in mind, we utilize a comprehensive approach to select and employ the leading tour guides and tour providers around the globe. We hold our people to very high standards which we measure by our comprehensive Quality Control process and, most importantly, by our customer feedback, which we will actively seek from each of our customers.

Our Owners
Shore Excursions Group is owned by seasoned travel executives possessing extensive experience across many sectors within the travel industry.

Michael Bonner
Mr. Bonner has over a decade of experience working in the cruise industry in a variety of roles for both Royal Caribbean Cruises Ltd. and Viking River Cruises. Most recently, Mr. Bonner was the Chief Operating Officer for The Scholar Ship, a Royal Caribbean program aimed at providing college students onboard educational programs in conjunction with enriching shore excursions around the world. Mr. Bonner also helped co-manage Viking River Cruises U.S. Operations, and he ran the corporate, strategic, and deployment planning functions at Royal Caribbean. While at Royal Caribbean, Mr. Bonner was responsible for forming Royal Celebrity Tours, Royal Caribbean's land-based tour operation in Alaska, which takes cruise passengers on multiple day tours through the interior of Alaska either before or after their cruises. Prior to working at Royal Caribbean, Mr. Bonner was a consultant for Booz Allen & Hamilton.
Less
from $103.00 (USD)
Per Person
Contact Us
Tour Type
Private
Group Size
Private
Activity Type(s)
Cultural, Active, Scenic
Tour Duration
7 Hours
Activity Level
Easy
Tour Leaves From
Cruise Ship Pier.
Food/Beverage Provided
Not included.
Special Instructions
We recommend wearing comfortable, seasonal clothing and sturdy walking shoes.
Restrictions
Guests must be able to step in and out of the vehicle. This tour can accommodate a collapsible wheelchair, however any guest with mobility issues should consider the varied terrain this tour will encounter.
Terms & Disclaimers